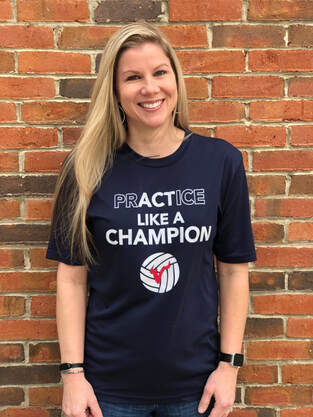 About Program Director and Head Coach Jillian Schoenborn
Jillian Schoenborn serves as program director and head coach of the Lady Vikings Volleyball Team. A native of Detroit, Michigan, Coach Schoenborn attended The University of Michigan-Dearborn on a four-year volleyball scholarship. She earned her bachelor's degree in Education and taught middle school Math for five years prior to having children.

Coach Schoenborn has coached both boys' and girls' volleyball, middle school through varsity. Most recently, she was the director of Calvary Christian School's Volleyball program and coached middle school, JV, and varsity teams at the Columbus, Georgia private school. When she isn't coaching school volleyball, she coaches at A5 South in Peachtree City. She has worked with the 2nd ranked club in the nation for three seasons. She believes in the importance of continuing education for coaches and has gained professional development experiences from one of the top clubs in the nation, Sports Performance in Chicago. In addition, Coach Schoenborn helped create an Amateur Athletic Union (AAU) volleyball club for underprivileged kids as a volunteer.

Coach Schoenborn is married and has four children. Her husband, Dan, is a physician at St. Francis Hospital. The couple has been together for 24 years.

"We are excited to welcome Coach Schoenborn to the Viking family," says St. Anne-Pacelli Catholic School Athletic Director Corry Black. "She brings a wealth of experience to our volleyball program, and I know she will be an excellent leader for the student-athletes she coaches."

"I'm looking forward to the positive environment that Viking Athletics provides the students, parents, and coaching staff at St. Anne-Pacelli Catholic School," Coach Schoenborn said. "I love how St. Anne-Pacelli empowers their female athletes to excel on and off the court."