The Vikings Cheerleading program offers two seasons of the sport for both middle and high school students. Spirit Cheer is held during football and basketball season, as the girls support the athletic teams in the fall and winter. 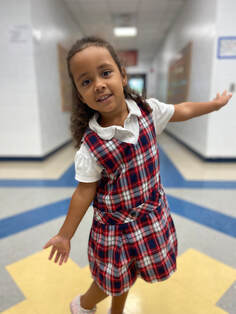 Hollie Queener
Director of Cheerleading and Head Varsity Cheer Coach
Hollie Queener came to St. Anne-Pacelli Catholic School in June 2015 as a Middle School Social Studies Teacher. She was named the 2016 Georgia History Teacher of the Year. She then became a teacher in the High School History Department in 2017, teaching AP US History, Pre AP US History, Psychology, Sociology, and Current Events. She is our school's 2020 Page One Teacher of the Year nominee. Since joining the high school, Mrs. Queener has been involved in all aspects of student life - from helping with Student Council, to Prom. In addition to her classes, she is very excited to take on a new position outside the classroom as Director of Cheerleading and Head Varsity Cheer Coach. “I have cheered and danced since I was 2 years old," Mrs. Queener says. "I love the performance and pride that comes from training in these areas. I look forward to building strong women that are equipped with skills and confidence to achieve any goal they so choose.”

Mrs. Queener lives in Pine Mountain with her husband Robert and their daughter Caroline, who will be entering St. Anne-Pacelli High School in the fall as a freshman, and their two cats Prissy and Peta Pepperfrost. “We are a sports family and love cheering on the Vikings!”

"I am looking forward to mentoring both middle school and high school cheerleaders as they work to increase the school spirit and pride at St. Anne-Pacelli," Miss Fortson says.

Jeanette Goedert
Vikings Cheerleading Assistant
Jeanette Goedert is a proud alumna of St. Anne-Pacelli (Class of 1985), and is our Middle School Assistant. She's been working at the school for 17 years. During that time, she has served as a Middle School Cheer Coach from 2010-2012 and Varsity Spirit and Competition Cheer Coach from 2013-2016. She was also a Georgia High School Association Competition Cheer judge in 2018. Mrs. Goedert plans on helping grow the Vikings Cheerleading program with her knowledge and passion for the sport. She is happily married to her husband, Jeff. They have three kids - Josh; Carson (Class of 2009); and Colbi Goedert Tamez (Class of 2015). Mrs. Goedert says when she's not at work, she enjoys traveling to see her 1-year-old granddaughter, Violet.

"I look forward to reinforcing the St. Anne-Pacelli core values in cheerleading," says Mrs. Goedert. "I want to be a part of the sportsmanship and play a positive role with the student-athletes. Go Vikings!"